The border between Israel and Egypt certainly counts as one of the most dangerous borders for migrants. So far the main danger for african migrants trying to enter Israel from Egypt has been the Egyptian military, which seems to be exceptionally trigger happy when faced with migrants attempting to cross the border. 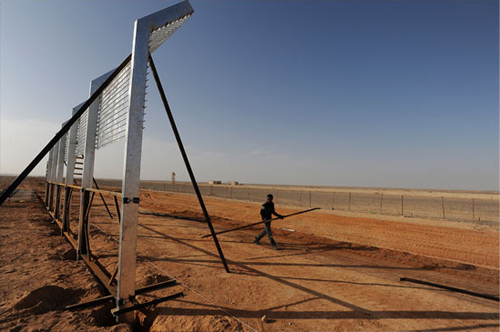 Photo by Ahikam Seri Seems that the Israeli government is not satisfied with the services rendered by the Egyptian Army (or they expect that a post-Mubarak military has better things to do than shoot unarmed migrants who are attempting to leave the Egyptian territory) and has started to construct a border fence designed to keep out migrants attempting to enter via Egypt.

While building border fences is not that unusual these days, it is somewhat surprising to read (in an article published by Haaretz) that the Israeli government is employing migrants who have made it across that particular border in order to build the border fence:

The government is employing Eritrean asylum seekers to help build a border fence designed to keep out other migrants seeking to enter the country from Africa via the Sinai Peninsula.

A man who gave his name as August […] had arrived in Israel five months ago. According to August, the hardest part of the journey was trekking through the African desert. Now, once the border fence along the Egyptian frontier is completed, migrants will find it even more difficult to enter the country.

August laughed when asked if he felt guilty that he was helping put up a structure designed to keep fellow Eritreans out of the country. “I have a family that remained in Eritrea,” he said. “While they would love to come here, they know the journey isn’t easy.” As August tells it, he simply has no choice but to earn a living any way he can.

While the state has legally barred its citizens from employing asylum seekers from Africa, it doesn’t enforce the ban. Months ago, the Interior Ministry’s Population Registry inserted a clause in the temporary-status visas given to asylum seekers stating that under no circumstances could they be hired.

But it is in the state’s interests for asylum seekers to support themselves financially, so it has turned a blind eye to asylum seekers who break the law – until it can finish building a large holding facility that will provide the migrants with their basic needs. Only then will the state start enforcing the no-hiring law. […]