It is pretty obvious than there is much more to the whole #cablegate/wikileaks story than i was willing to concede in my last post (i might even be a bit embarrassed about it). anyway below are some pointers to some of the more interesting writings from the last couple of days. Also it seems that the pakistanis (who are not commonly known for their sense of humor) are really enjoying the whole wikileaks thing: 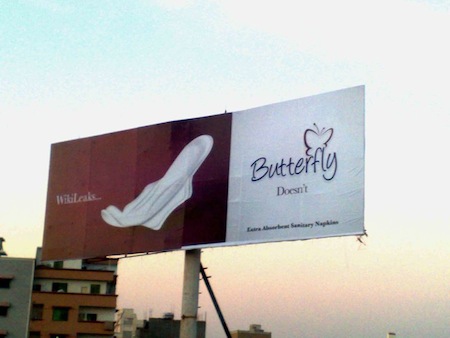 Ad for sanitary napkins close to Tariq Road in Karachi via kabobfest. A good place to start if you want to put the rant from my last post into perspective is this post at zunguzungu that analyses Assange’s 2006 paper on ‘State and Terrorist Conspiracies‘ (pdf). If you are so inclined you can read this paper as an attempt to argue that reporting on the non-news contained in the cables will (or at least could) have a lasting impact on the operational capacity of nation states (which, of course would be a good thing).

Not directly related to the release of the cables are two articles that try to shed some light on the drama surrounding the sexual assault allegations against Assange. Naomi Wolf has a furious piece in the Huffington post in which she puts the international arrest warrant for and subsequent arrest of Assange in the context of how poorly nation states normally deal with sexual violence against women. Based on this she comes to the conclusion that ‘Sweden, Britain, and Interpol Insult Rape Victims Worldwide‘. Over at 538 Nate Silver applies bayesian reasoning to arrive at pretty much the same conclusion.

update 22.12.10: here is another one, ‘the blast shack‘ a really long writeup by Bruce Sterling that is full of absolutely delightful observations and analogies. Here are two of my favorite ones, a description of Assange as the personified internet…

If the Internet was walking around in public, it would look and act a lot like Julian Assange. The Internet is about his age, and it doesn’t have any more care for the delicacies of profit, propriety and hierarchy than he does.

… and a comparison between Bradly Manning and Jerome Kerveil:

Instead, he’s very like Jerome Kerveil, that obscure French stock trader who stole 5 billion euros without making one dime for himself. Jerome Kerveil, just like Bradley Manning, was a bored, resentful, lower-echelon guy in a dead end, who discovered some awesome capacities in his system that his bosses never knew it had. It makes so little sense to behave like Kerveil and Manning that their threat can’t be imagined. A weird hack like that is self-defeating, and it’s sure to bring terrible repercussions to the transgressor. But then the sad and sordid days grind on and on; and that blindly potent machinery is just sitting there. Sitting there, tempting the user.

So i have been trying to buy a dvd copy of the latest James Bond movie all along my trip. finally managed to score a decent copy with proper english sound in Shenzhen (china) yesterday. in total i bought 4 different discs which gives a nice little insight in the dynamics of movie piracy in asia:

25/11 Dubai, Karama market: got a 4-1 dvd with three other crap movies on it in a upstairs room behind one of the numerous fake brand clothing shops in the Karama Market Shopping Complex. Paid 20 Dirham, to the guy who claimed that he had seen it the other night and that image and sound quality were ‘good’. turned out to be really crappy image quality (blurry 320*240 pix) and the sound was distorted and out of sync. the seller claimed he got his DVDs supplied form Malaysia.

28/11 Delhi, Palika Bazaar: got the same 4-1 DVD with the same unwatchable video and audio files on it from one of the many stalls in the palika underground shopping complex for 200 rupees.

08/12 Temple Street Night Market, Hong Kong: got a single movie DVD from a market stall on the Temple Street Night Market. According to the cover it is a region-code less English language version with English, Chinese and simplified Chinese subtitles. The person i bought it form for 20 Hong Kong Dollars claimed that he had seen it the night before and that audio and video were fine. Turns out that audio and video are good quality, except that the audio is in russian (so is the DVD menu) and that there are no english subtitles. the disc also contains a muted and inaudible english sound track.

09/12 DVD shop near the Shenzhen railway station, China: Nobody claimed anything, because nobody spoke english. bought a single movie DVD for 10 yuan in a shop near the railway station. The back cover contains a senseless machine translation which seems to refer to the movie, plus the credits for the latest ‘harry potter’ movie. The disc label looks professional but there is the same russian language menu as before. however this time there is actually an audible english soundtrack which runs in sync with the images (except for 4 minutes in the second half where it runs out of sync).

meanwhile... is the personal weblog of Paul Keller. I am currently policy director at Open Future and President of the COMMUNIA Association for the Public Domain. This weblog is largely inactive but contains an archive of posts (mixing both work and personal) going back to 2005.

I also maintain a collection of cards from African mediums (which is the reason for the domain name), a collection of photos on flickr and a website collecting my professional writings and appearances.

Other things that i have made online: